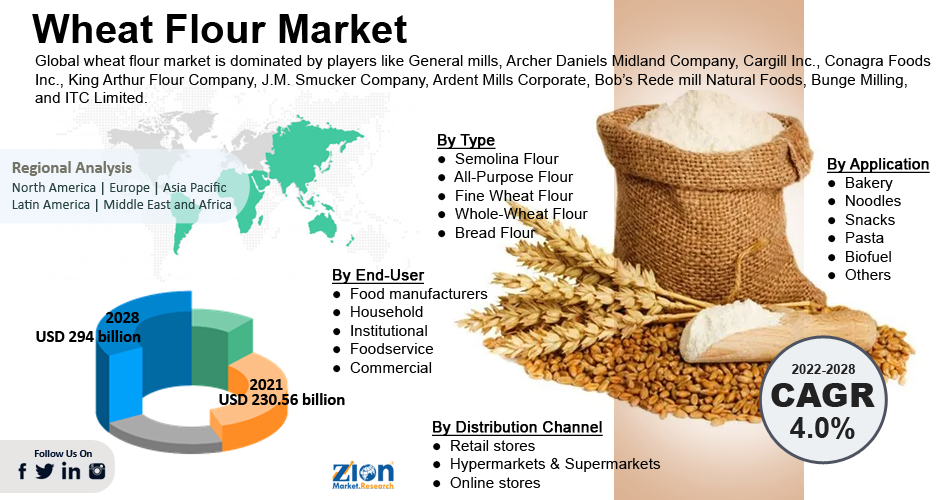 The value of the global wheat flour market was estimated at US$ 230.56 Billion in 2021. By 2028, the Zion Market Research  forecasts the market would be worth $294 billion, with a CAGR of 4.% between 2022 and 2028. Considering the unknowns surrounding the COVID-19 pandemic, we are constantly monitoring and assessing the direct and indirect effects of the outbreak on a variety of end-use sectors. The report acknowledges the significance of these insights as a driving force in the market.

Nowadays, wheat flour is one of the most widely used components in cooking all over the world. It helps with things like cholesterol, metabolism, weight, and glucose regulation, among other things. Because of the protein gluten included in wheat flour, which gives dough strength and flexibility and improves the texture of baked goods, wheat flour is widely utilised. The global demand for wheat flour has been rising for a number of reasons, including increased population, higher per capita income, higher per capita consumption of bakery items, and shifting lifestyle preferences.

Bread, noodles, pasta, and morning cereals are just some of the many baked goods and fast food items that rely on wheat flour as their primary ingredient. Worldwide sales of wheat flour have increased as consumer demand for these goods has increased. Consumers of all income levels have ready access to wheat flour because of its low price relative to flour derived from other grains. Wheat flour with added vitamin A has also been introduced by producers to meet the nutritional requirements of consumers. Wheat flour has also found new uses in the creation of bioplastics, adhesives, paper, shampoos, and conditioners.

A major Nigerian milling company, Crown Flour Mills, said in July 2022 that it will import about 500,000 mt of wheat from India, pending approval from the two countries’ governments. It is hoped that this will improve the flow of wheat from Nigeria.

Foods grown without the use of harmful chemical fertilisers, pesticides, or GMOs have seen a rise in popularity, leading to a rise in the demand for organic farming (GMOs). Rising rates of diabetes, cancer, and heart disease, among others, have led consumers in many areas of the world to believe that organic food is healthier and safer for the environment and people. This belief has led to a surge in the demand for organic wheat flour in particular. As a result of the shift in demand, producers of wheat flour are supplying the retail market with organic wheat flour in a variety of package sizes. For instance, Cascade Organic Flour introduced retail bags of organic all-purpose flour weighing 5 pounds in August 2021, thereby expanding the company’s array of flour products available to consumers. Organic packaged food products including bread, noodles, spaghetti, pizza, and other bakery products are increasing the industrial manufacturing sector’s demand for organic wheat flour.

Global Wheat Flour Market is dominated by the Asia-Pacific region.

Since most staple cuisines in the Asia-Pacific Region require flour to be prepared, the region’s wheat flour consumption is considerable. Furthermore, the proliferation of restaurants, cafés, and independent food service providers in the region to meet the growing food needs of the populace in key nations like India and China has raised the demand for wheat flour in the region. In the 2021–2022 marketing year, China consumed roughly 148.5 million metric tonnes of wheat, while India consumed 104.2 million metric tonnes of wheat, as reported by the United States Department of Agriculture. The wheat flour market in Asia and the Pacific is dominated by China. Due to the fact that wheat contains fewer carbs than rice does, wheat-based products have gained popularity in the Asia-Pacific region. The residents of the area have a preference for whole wheat and brown bread due to the higher nutrient content of these options. Furthermore, the growing demand for wheat flour in the packaged food business and the HoReCa sector is driven by the rising popularity of western meals like pizza, burgers, and pasta among others.

With predictions at both the global and regional level from 2022-2028, Zion Market Research analyses the most important trends in each category of the global wheat flour market. Our report segments the market by product category, application, and sales channel.

Several different types of businesses compete for customers in the wheat flour market. Major companies in this sector include General Mills, ITC Limited, Conagra Brands, Inc., and Archer Daniels Midland Company. The major players are combining forces and improving their distribution networks to increase their footprint in more markets. In addition, a growing number of food manufacturers are expanding into the wheat flour industry. For instance, packaged food manufacturer Parle Products introduced their branded wheat flour product, Parle G Chakki Atta, to the market in June 2021. The product is being introduced to consumers in both the urban and rural communities of northern and western India.

Previous PostGuatemalan cheese linked to 40 cases of illness
Next PostThe Growing Demand for Phytosterols: A Look at the Market Trends