Mercedes EQA Teaser Shows An Electric Peer To The GLA 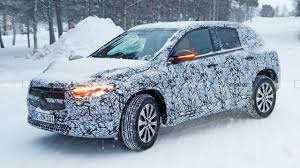 Mercedes has launched a teaser for the manufacturing EQA, and it does not seem to share much of anything familiar with the last year’s concept EV. The near-concluded car is now placed as an “electric sibling” of the 2021 GLA crossover, full with a virtually indistinguishable side profile. Mercedes has not stated much more, but it is committing “off-road functions” for more adventurous users. You can hope for an official launch sometime next year.

The design might let down those who were expecting for a truthfully small electric car. On the other hand, it can also be agreeable to those who need an electric vehicle with a tri-star status but feel the EQC is out of their budget. The GLA is one of the cheapest models by Mercedes in North America, after all, and even the normal electrification premium can make its electric vehicle equivalent definitely cheaper as compared to the $67,900 EQC.

On a related note, EQC all-electric SUV by Mercedes was initially planned to launch in early 2020 in the US. If you were expecting to purchase the car stateside, you will have to hang out a bit longer. The firm has rescheduled the roll out date to 2021. The EQC launched in Europe previously this year, and it seems that it “created high interest,” sufficient so that Daimler (parent company of Mercedes) made a “tactical decision to first support the increasing user demand” in Europe.

The base model of EQC is anticipated to begin at $67,900—not more than the $84,990 Tesla’s Model X and the $74,800 Audi E-Tron. Both of those cars are now on sale, so they have a good beginning. Postponing the sale in the US for the EQC will probably cost Mercedes a noteworthy number of sales.