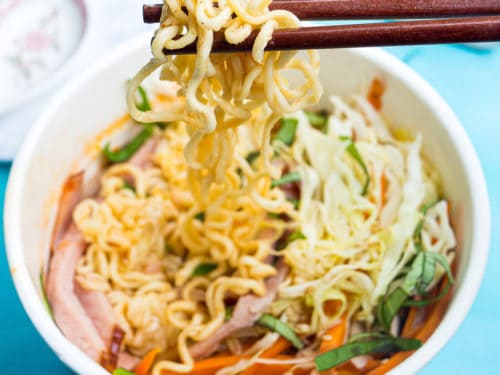 The instant noodles are nothing but precooked dried noodles that are dried out through either air frying or flash-frying. Instant noodles have reached skyrocketing popularity at a global level owing to their quick making, portable size, and ease of handling and storing. They are also available in a wide variety of flavors along with numerous varieties in veg and non-veg variety that has led to an increase in its popularity among all categories of consumers.

The global rise in the demand for ready-to-eat & convenient food products, changing lifestyle and busy work schedule is the major key driving factor for the growth of the global instant noodles market. Further, the benefits associated with the instant noodles such as minimum making time, longer shelf life, and easy availability of the product is contributing to the market growth. The rising middle-class population, rising preferences of noodles among the millennial population, and the easy & wider availability of the product in the marketplace has surged the demand of instant noodles market. However, the presence of a high amount of carbohydrates leads to an increase in incidences of obesity or diabetes among consumers which will be expected to hamper the instant noodles market growth.

The negative health effect of deficiencies and malnutrition has led to the consumption of healthy and nutritional food in daily diet. On the other hand, increasing demand for consumers for healthier and nutritional food products such as instant noodles with nutritional benefits is offering opportunities to key players. The introduction of gluten-free food, sun fried or air fried products by the key players is expected to offer growth opportunities for the global instant noodles market in the forecast period.

Asia Pacific region is projected to hold the major share of the global instant noodles market during the forecast period. Factors such as an increase in consumer base, the increasing purchasing power of consumers, and the hectic work schedules of people are driving the growth of the market in this region. China and Indonesia account for the largest share of instant noodles in this region. On the other hand, North America is estimated to hold the second position in the market and is expected to account for a significant share over the forecast period. This is attributed to the growing demand for instant noodles as convenient food for consumption owing to the increasing demand for packaged food products.