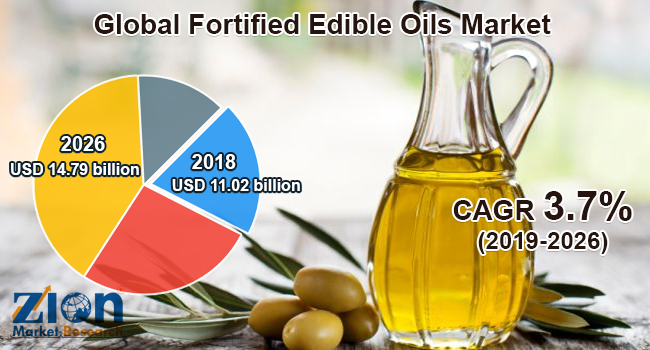 Zion Market Research has published a new report titled “Fortified Edible Oils Market by Product Type (Palm Oil, Soybean Oil, Sunflower Oil, Olive Oil, Corn Oil, Canola Oil, Rice Bran Oil, and Others), by Micronutrient (Vitamin A, Vitamin D, Vitamin E, and Others), and by Distribution Channel (Hypermarkets/Supermarkets, B2B, E-Commerce, Specialty Retail, and Others): Global Industry Perspective, Comprehensive Analysis, and Forecast, 2018–2026”. According to the report, the global fortified edible oils market accounted for USD 11.02 billion in 2018 and is expected to reach USD 14.79 billion by 2026, growing at a CAGR of 3.7% between 2019 and 2026.

Edible oils are enhanced with added micronutrients and are known as fortified edible oils. These oils contain an appropriate concentration of different vitamins like Vitamin A, D, and E, among others. These oils are mostly manufactured and consumed to curb the problem of undernourishment. Thus, these have been gaining importance across the world over the last few years.

By micronutrient, the global fortified edible oils market is divided into vitamin A, D, E, and others. Vitamin A dominates the market, due to it being more deficient among the common masses. This segment is expected to dominate the market in the future as well. This demand can be attributed to the increasing diseases caused by lack of vitamin A, such as xerophthalmia. Vitamin D and E are expected to show substantial growth in the years ahead.

The Middle East and Africa and Latin America dominate the global fortified edible oils market, owing to these oils prominence in various regional cuisines. This domination is expected to continue over the estimated timeline as well. Europe and North America are expected to show substantial growth rates, due to the growing preference for healthy food ingredients that helps in the overall health improvement.