Tesla to launch electric ATV in the year 2021. 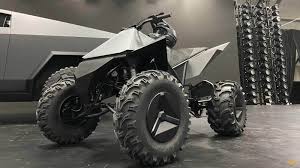 Tesla during their unveiling of the Cybertruck last month had brought an electric ATV on stage. The vehicle had been made by their design team and came up during the end of the event.

The vehicle is known as the Tesla Cybersquad and had been mainly used for demonstrating the capacity of Cybertruck when it comes to loading and can lower the suspension on the rear end to accommodate the loading of a vehicle to the bed of the pickup truck through a ramp.

Till this time, there was no clarity regarding Tesla planning on making their ATVs available however it was later confirmed by the CEO, Elon Musk that it is going to be an option for the buyers of the Cybertruck.

He has confirmed that Tesla is making an attempt at bringing it to the markets by the year 2021.

There is not a lot of footage of the concept of electric ATV and Tesla has not made any images public either however there are a few interesting pictures and videos which are doing the rounds.

There were a few suggestions that Tesla had just made changes in Yamaha’s body panels however Tesla has evidently done a lot more than just make changes to the body.

Anyone who knows ATVs well is familiar with the fact that they make a lot of noise upon starting and they do so even at crawling speeds but the Cybersquad did not make any major noise at the time it started which shows the evident innovation by Tesla.

Tesla to launch electric ATV in the year 2021.
Previous PostSwitzerland To Remove Import Tariffs To Reduce Prices
Next PostFacebook Is Brainstorming On Its Personal Operating System