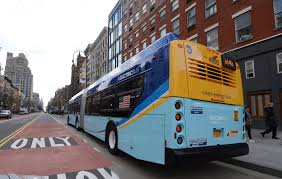 “‘We have reached a milestone with an all-out electric fleet”, says Andy Byford, the President and CEO NYC Transit. “They are a part of our Fast Forward plan”, he says.

The electric bus passed through 14th Street on Sunday, as it ventured on its maiden trip.

Byford states that 15 such all-electric buses have been newly introduced, to modernize the bus fleet and the first to be owned by the New York City Transit. Byford has introduced the Fast Forward plan to modernize the public transport system.

The pilot program was launched as a three-year program in 2018. There are 10 such electric buses that will help to test the all-tech technology.

By 2040, we will have an all-electric fleet, he says. We are very serious about our target to go green. Each bus cost around $1.4 million.

These buses will save about 8,000 gallons of fuel annually, which is a big saving for the country and it helps to keep the atmosphere pollution-free, as each vehicle will reduce gas emissions by 90 tons.

They are buses that are connected by a joint in the middle. There are already 10 such standard buses running. By introducing new technology through electric vehicles, New Yorkers will definitely be benefitted, as the vehicles travel at a greater speed, make less noise and cause less pollution.

MTA Bus Company’s Acting President Craig Cipriano says that 16 charging stations are provided at West 40th Street, Eleventh Avenue and at Midtown bus depot. He says, “Save the planet, ride the bus”. Buses will be charged overnight and it will take three hours to charge a bus. Once charged, they can travel with a single charge up to 50 to 90 miles.

Director of Climate Change Policy Lauren Bailey says that the change to electric vehicles will bring in a healthier and cleaner New York, as fuel greenhouse gas emissions will reduce in the environment.