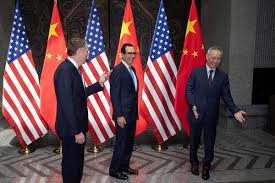 Stocks Fall On Early Trade Due To Trade Negotiation Uncertainty

The stocks in the United States had fallen at the beginning of the trade on Tuesday in the wake of the uncertainties over the trade negotiations between the United States after the report that came out of the White House said that it is going to delay the import tariff implementation on the goods imported from China which was set to take effect from the 15th of December as they are continuing their negotiations toward a deal that is known as the phase one deal.

The investors had been preparing for the policy meeting of the Federal Reserve which is going to take place on the morning of Tuesday.

The trade negotiators of China and the United States have been sowing the seeds for the delay in the implementation of the import tariffs of 15% which had been planned to be levied in on as many as $165 Billion imports annually of Chinese consumer goods as per the reports from Wall Street on the morning of Tuesday.

This news had triggered a rally in the stock indices that had been trading lower on the trade concerns after a different report which said that the lawmakers of the United States have been working on a newer bill which is going to bar the usage of federal funds for the buying of railcars and busses from China which is a move that if happens will complicate the completion of the trade agreement taking place between the two administrations of China and the United States before the deadline of 15th December when the new tariffs had been set to take effect. The rally though had been short-lived with the stocks went downwards at the beginning of the trade.